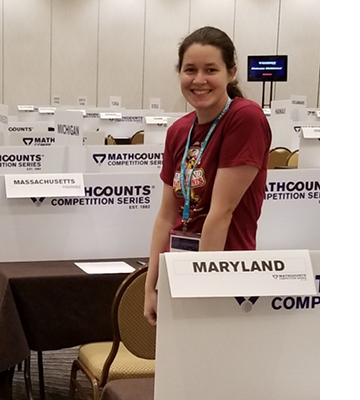 Kelly Misner, P.E., of our Baltimore office, was recently honored by Maryland MATHCOUNTS with its Wallace S. North Jr. Award for outstanding service to the organization.

MATHCOUNTS is a nationally based nonprofit organization that strives to make math education more fun for students in grades 6 through 8. It is sponsored by both the National and Maryland Societies of Professional Engineers.  The Wallace S. North Jr. Award recognizes MATHCOUNTS coaches and volunteers who support the organization in the Maryland area and is named for Wally North, P.E., to honor his 25-year commitment to MATHCOUNTS before he passed away in 2008.

Kelly first competed as a Walkersville Middle School MATHCOUNTS Mathlete in the Maryland State Competition during 2005 and 2006, following in the footsteps of her two older brothers. In high school she volunteered to assist her middle MATHCOUNTS school coach, and in college she participated each year at the University of Maryland’s Potomac Chapter MATHCOUNTS Competition.

Kelly continued her service to MATHCOUNTS after she joined STV in 2014 and has served as Annapolis Chapter Coordinator since 2015. She is now the deputy state coordinator for Maryland MATHCOUNTS, attending three chapter competitions each year (running one competition and volunteering at the others) and assisting at the Maryland State Competition each March.

To learn more about MATHCOUNTS or to find a chapter near you go to www.mathcounts.org.