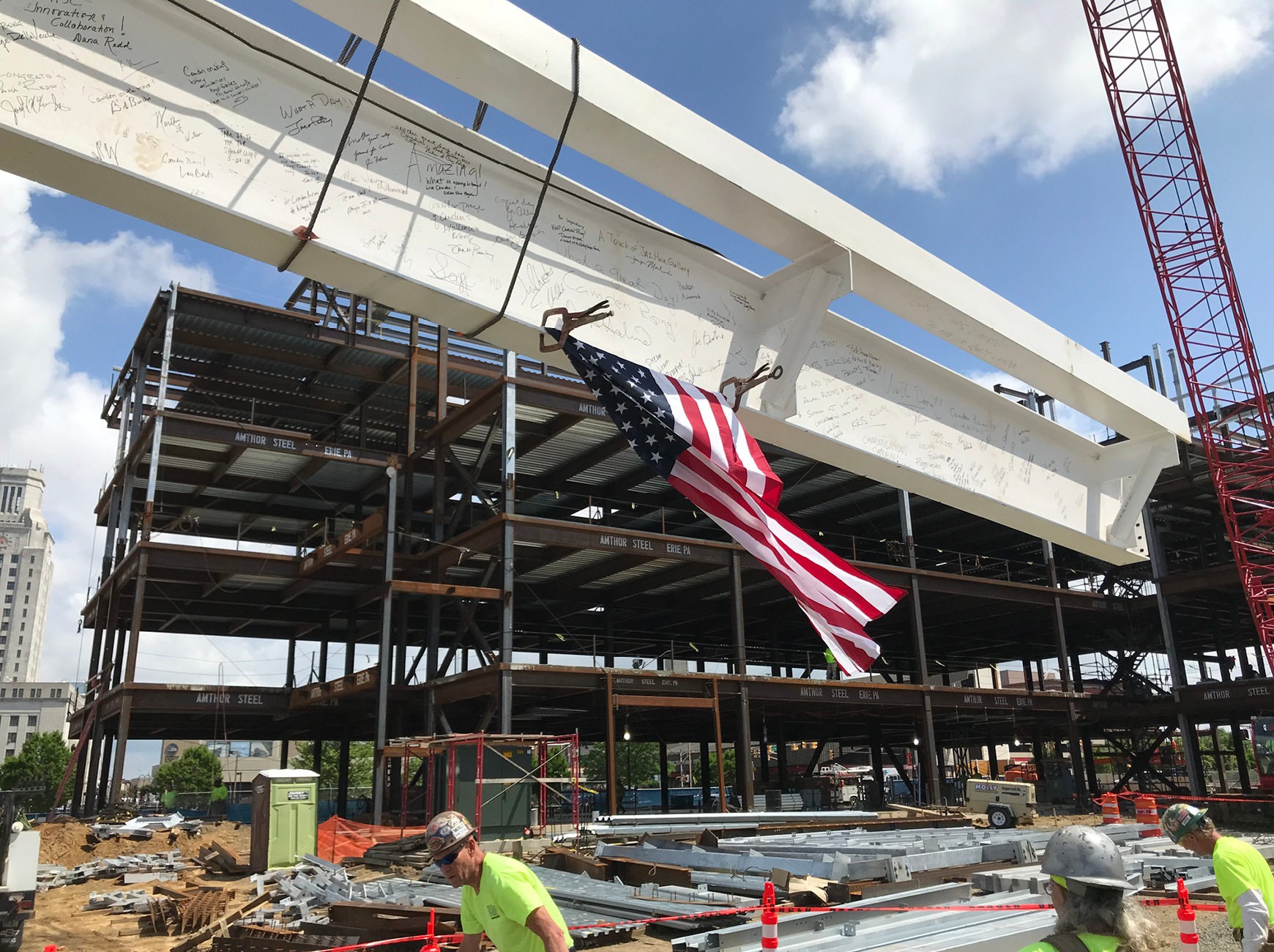 A year after breaking ground, Camden, NJ, officials and project team members celebrated the topping off of the new 125,000-square-foot Joint Health Sciences Center (JHSC) as the final steel beam was placed atop the four-story building to mark the next phase of construction. STV, a leading construction management and design firm is managing the construction of the $70 million project.

“This is a significant milestone as this project continues to move forward and right on schedule,” said STV project manager Dennis Hayes. “We have an excellent project team on site that is committed to delivering a marquee facility that will fulfill the highly technical need to conduct advanced research and medical training for three academic institutions in the years to come.”

The development of the JHSC was established through a partnership of three of New Jersey’s leading academic institutions – Rowan University, Rutgers-Camden University and the Camden County College. It was designed as an advanced medical research facility as part of downtown Camden’s redevelopment as a “meds and eds” hub for medical research and education. The 95,000-square-foot building will include a 30,000-square-foot Healthcare Simulation Center to help prepare students for real-world medical situations.

Construction of the JHSC began in May 2017 and is expected to be completed in the spring of 2019. Designed by HOK, the building includes several cutting-edge features and will bring students from multiple academic disciplines together in a collaborative environment with shared laboratories, equipment, classrooms and “soft spaces” such as cafes and study areas.

“We’ve partnered with Rowan University in the past in converting a landmark bank building into its downtown Camden campus,” said STV vice president Timothy Mason, CCM. “This project is particularly meaningful since it continues our relationship and extends it to two other world-class institutions. This is a solid win for Camden’s continued revitalization.”

The new JHSC is the first of its kind to co-locate two four-year institutions, a medical school and a county college in the same facility. The arrangement is intended to foster collaboration. At the same time, it creates its own set of challenges as each institution has its own technological requirements that need to be specifically tailored into the building.

The high-tech facility will also incorporate a nod to the neighborhood’s past. Once the site of the former Trinity German Evangelical Lutheran Church, the JHSC will preserve the iron fence that surrounded the sanctuary. New sidewalks and plantings will adorn the outside of the building to create more green space in the downtown area.

In 2016, STV completed the renovation and expansion of the former First Camden National Bank & Trust building at the heart of downtown. The new Rowan Camden Academic Building doubled the number of classrooms and office spaces to consolidate the university’s Camden campus under one roof for the first time. The firm’s work on the project has been recognized by the Mid-Atlantic Chapter of the Construction Management Association of America and the American Council of Engineering Companies of New Jersey.