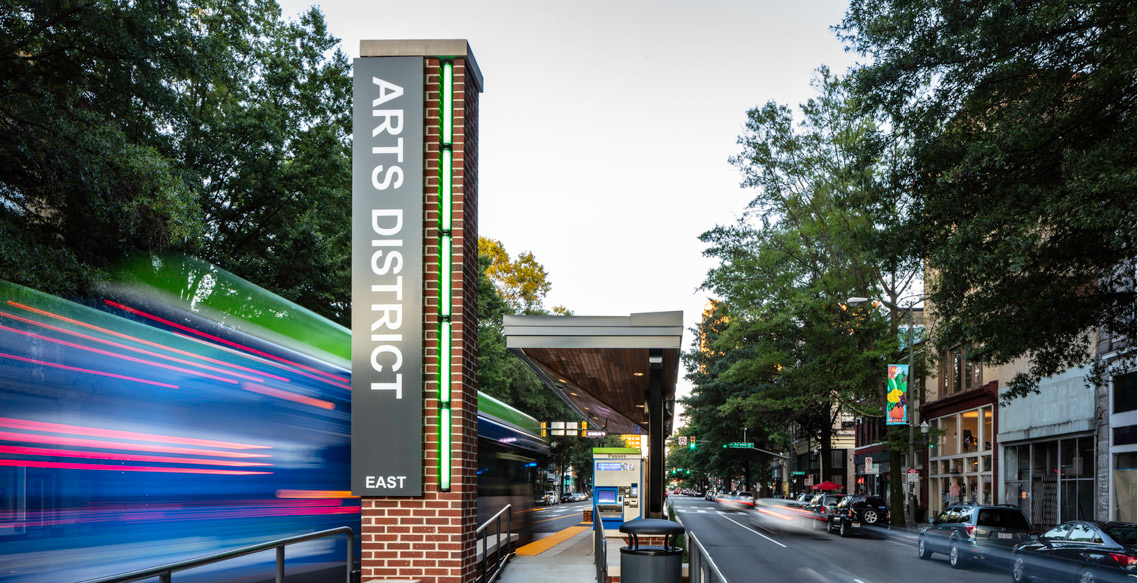 The Pulse, a new high-quality, high-capacity bus rapid transit (BRT) system that strives to foster economic growth and enhance mobility in Richmond, VA, has gone into revenue service. STV, a leading transportation engineering firm, served as the lead designer for this project. The Lane Construction Corporation was the contractor for the program, which was procured using the design-build delivery method.

Public officials praised The Pulse, which runs 7.6 miles east-to-west along East Main and Broad streets in Richmond and Henrico County, as the first of many planned transportation infrastructure improvement programs in the area. The Pulse provides the city with its first BRT-style service since the late 1940s. The project is operated and administered by the Greater Richmond Transit Company (GRTC), with grant oversight by the Virginia Department of Rail and Public Transportation (DRPT), and construction oversight performed by the Virginia Department of Transportation (VDOT).

“The Pulse became reality thanks to the active involvement of a number of city and commonwealth leaders and advocates who have a vision of how investment in transportation can transform Richmond,” said Lara Hegler, P.E., STV’s transportation director of operations in the Virginia/Washington D.C. region. “We are honored to be a part of this program and for our role supporting Lane and the City of Richmond.”

The Pulse was financed through a collaboration of the Federal Transit Administration (FTA), DRPT, VDOT, the City of Richmond, Henrico County, and GRTC. Construction on the $65 million bus line began in August 2016 and lasted 22 months. The program was financed by a $24.9 million federal TIGER grant as well as $32 million in state and $8.3 million local funding from the city and Henrico County.

As part of its contract, STV performed traffic engineering and systems integration, architectural design for stations, as well as drainage and utility design. The firm also conducted public involvement sessions.

The overall scope of services included design of five stations located in the roadway median and nine curbside stations. Buses come every 10 minutes during the morning and evening rush hours; every 15 minutes during morning, daytime and nighttime off-hours; and every 30 minutes after 11:30 p.m. For the first three-to-six months, trip times will run about 40 minutes from end to end.

City officials, citing data from the GRTC Pulse corridor plan, anticipate a steady increase in investment along the Pulse route over the next 20 years. Last fall, the Richmond City Council approved zoning changes that will promote more dense development and less stringent parking requirements along the route.

During its first-week of revenue service, The Pulse served nearly 31,000 riders, far surpassing its initial goal of 3,500 daily riders.

Back to All Articles